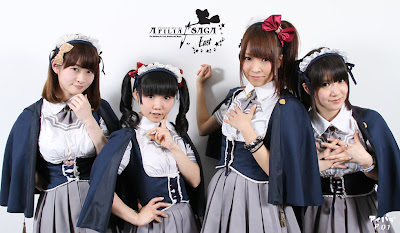 The interview is conducted in a question and answer format similar to those of the previous 3 reports.
In this interview, they discuss about the charm of the Afilia group
(Meiry:  ... At the Ikebukuro shop, we are students at a Magical Gakuin where the Senpais(what we call our guests) will come and study Magic with us...)
(Maho: ... At Ueno Sherry's we have a drinking bar concept...)
(Kohime: The charm of the group would be that the same Afilia group's shops will have varying concepts...)

and the beauty of Afilia Saga East. They also touch on various topics such as how they view the graduation of the first generation members Rose and Meena as well as their goal for this year!
(Kohime: Afilia Saga East wants to perform at the Animelo Summer Live! ...)
(Maho: We want to have more fans locally as well as abroad! ...)

NOTE: I have only translated part of their answer thus the "..."

Wouldn't it be great if Afilia Saga East could really perform at Animelo Summer Live. They have become increasingly relevant to the anime scene in my opinion. The Afilia group concept is also very interesting so please check it out when in Japan. They have branches in Ikebukuro, Ueno, Roppongi, Nagoya and Osaka.
The Afilia Saga East members will be working at the branches in Tokyo. Please check out the members page to the right. The two new members who are not included on the page yet, Laura(Sucre-chan) and Emiu work at Ueno Sherry's and Roppongi Stars respectively.